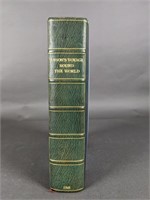 Quinn’s Auction Galleries is pleased to present an auction of rare books, antique maps, and Americana. The sale features over 450 rare and signed books, maps, and autographs. These include items such as two Presidential signing pen, signatures of the presidents from Nixon to Joe Biden, the Rehnquist Supreme Court, and a copy of the Faden Map of New York from 1776. We also feature two photographs of Alexandra Feodorovna, both signed by her with one of her son the late Alexei, also with his signature from the official Imperial Photographers of the Russian Royal Family. Books include early printings, fine bindings, First editions, and books signed by Robert Frost, a complete set of the Christmas Books by Dickens, handsomely bound. The auction also contains a 1500 incunable of Regulae Monasticorum in original pigskin vellum as well as several illuminated leaves. Other auction highlights include a very fine issue of the first American stamp produced: The 1851 Benjamin Franklin 1c Blue, Type Ib (5A). Position 8R1E. Quinn’s is also excited to offer the library of such an influential figure in the conservation movement that has, and will continue to change the world. Dr. Thomas E. Lovejoy, known as the Godfather of Biodiversity, after he coined the term, was a pioneer in the conservation movement and a central figure in the effort to preserve the Amazon Rainforest since the 1960's.  A Yale-educated tropical biologist and conservationist, Dr. Lovejoy dedicated his life to the preservation of the Amazon rainforest, bringing the attention it needed as one of the first biological conservationists, marrying science and policy, in his field. Dr. Lovejoy's passion for the tropics extended to his library where he collected an number of extraordinary books on adventure, travel, and science. His collection spans from Acosta First Edition describing the Americas in 1589 to Maximillian expedition to Brazil in the late 1810s. We are proud to present a large collection of rare Brasiliana, Exploration and Ornithology books. Open Preview: Wednesday, November 17th – Monday, November 28th We will be closed on Thursday 25th and 26th for the Thanksgiving holiday. 11am to 4pm Shipping for our Rare Book and Autograph Auction will be handled by our trusted Shipping Partner UPS Store 3141- contact them at store3141@theupsstore.com or 703-533-9474. They are offering a discount for Quinn's customers for this auction. For a complete list of third party shippers, please contact shipping@quinnsauction.com.
Location
Falls Church, VA
Details
Auction Details
Catalog
View Catalog (452 Lots)
Single Page

No bids found for this item

In the case of a tie bid, precedence is given to the earliest bid

Your Max Your Bid

Your Max Your Bid

Your Max Your Bid
Click to add notes.
Notes saved

Email Privacy Policy We have created this email privacy policy to demonstrate our firm commitment to your privacy and the protection of your information. Why did you receive an email from us? If you received a mailing from us, (a) your email address is either listed with us as someone who has expressly shared this address for the purpose of receiving information in the future ("opt-in"), or (b) you have registered or purchased or otherwise have an existing relationship with us. We respect your time and attention by controlling the frequency of our mailings. How we protect your privacy We use security measures to protect against the loss, misuse and alteration of data used by our system. Sharing and Usage We will never share, sell, or rent individual personal information with anyone without your advance permission or unless ordered by a court of law. Information submitted to us is only available to employees managing this information for purposes of contacting you or sending you emails based on your request for information and to contracted service providers for purposes of providing services relating to our communications with you.

The email address {0} has been subscribed to the email list.

Oops, there was a problem.

I was unable to add your email address to the email list. Please check your address and try again.

Oops, there was a problem.